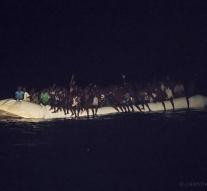 amsterdam - A rescue ship of Doctors Without Borders (MSF) has found during an operation in the Mediterranean Sea on a crowded rubber boat 25 dead men and women. The rescue ship took 107 survivors aboard.

MSF said Wednesday that the deaths were discovered under a layer of water and gasoline, presumably killed by inhaling petrol fumes. Of the rescued refugees had 23 medical care needed for chemical burns. Two were so badly that they had to be transported by helicopter to a hospital in Italy.

MSF is concerned that in 2016 the deadliest year in the central part of the Mediterranean will be. The UNHCR United Nations estimates the number of people that the sea this year crossed so far, already 327 800 people. Approximately 3740 people did not survive the journey to Europe. MSF rescued the last six months more than 17 000 people at sea.