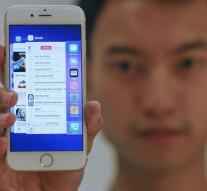 redmond - Mozilla has launched a AdBlocker for the Internet program Safari. The app is intended for owners of iPhones and iPads iOS 9 have on their system. That let Mozilla know by Tuesday the company blog.

The app is called Focus on Firefox. The application blocks ads and trackers, the parts of websites online users "follow" and their behavior chart. Remarkably, the app only works with Safari, and not with Mozilla's own Firefox browser. This has to do with the rules of Apple.The app Focus by Firefox is free to download in the App Store.
NEW