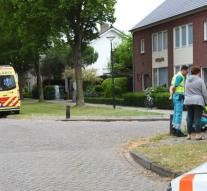 gemert - After a car, driving a car on Tuesday in Gemert, hit an 11-year-old boy on a bicycle, the driver was dropped. The police in place are looking for the door driver.

The assault took place on the Burgemeester Rietmanstraat. Two witnesses have noted the car's license plate. The boy was injured, but did not have to go to the hospital.