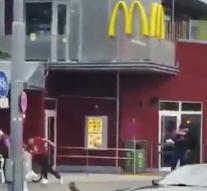 - Police chief Hubertus Andrae Munich told a news conference Saturday that the suspect of the massacre last night was not known to the police. There are so far no known links to terrorist groups, but the investigation is ongoing.

BBC News reports that previously thought during the events in the southern German city that it was going to be three shooters. But it turns out that it was probably two eyewitnesses went that as soon as possible wanted to leave the scene 'with considerable speed' in their car. It was later confirmed that they were not involved, Andrae added. 'It is still not clear what the motive for this crime,' he continued.

Mr Andrae also said that children were among the casualties, but gave no further details. Nine people and the gunman arrived at the terrorist act in order. Among them would be a girl of 15. 16 people were injured including three in critical condition.