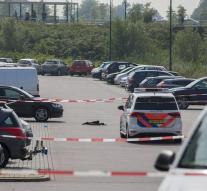 breukelen - The investigation into the shooting party Friday afternoon in Breukelen is still underway. A thirty-year-old Amsterdammer died in the hospital on Friday night after being taken to a parking lot by a still unknown perpetrator.

According to the police, liquidation is one of the scenarios, but it is not yet fixed.

At the shooting a famous Amsterdam criminal would have been liquidated. The alleged victim, 30-year-old Jaïr Wessels, was previously suspected of attempting to liquidate the criminal leader of the Satudarah motor club, according to The Parool.