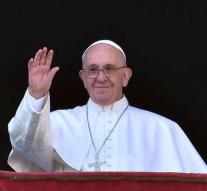 rome - Mother Teresa, the nun who worked in the Indian city of Calcutta with the poor and sick, is elevated to holy Sunday. During a special ceremony in St. Peter's Square in Vatican City Pope Francis appoints the Albanian nun to saint.

Francis wrote last year a second miracle to the little nun and was thus clear the way for the canonization. An Indian woman would exactly one year after the death of Mother Teresa have been cured of a huge tumor in her abdomen after a medallion was presented with a picture of the sister on the boil. A Brazilian man would cure a bacterial brain infection that he had nearly died.

Mother Teresa was born in 1910 as Anjezë Gonxhe Bojaxhiu in the then Ottoman city Üsküp, the current Macedonian Skopje. From the age of eighteen she worked in India, where she also founded religious orders. She was called the angel of the slums and was awarded the Nobel Peace Prize in 1979.


Yet Mother Teresa was not entirely uncontroversial. She is accused of abuse of funds and poor medical treatment. The conditions in the facilities of its order would have been lousy and they would have dealt friendly with questionable figures such as the Haitian dictator Jean-Claude Duvalier. According to several witnesses would have them baptized Catholic hospital on their deathbed.

That keeps Francis not to canonize her Sunday. This is Rome accompanied by masses, prayer meetings, exhibitions and even a musical. Expected hundreds of thousands at the special ceremony off, possibly even more than the 300 000 who attended her beatification in 2003. Among those present were also heads of state.