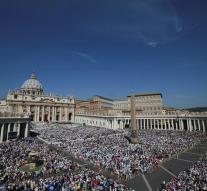 rome - Pope Francis on Sunday during a special Mass in St. Peter's Square, the nun Mother Teresa a saint explained. The Albanian nun, born Agnes Gonxha Bojaxhiu, was working in the Indian city of Calcutta and gold as an icon of charity.

Expected to be hundreds of thousands of people come to Rome to attend the canonization, possibly even more than the 300 000 who attended her beatification in 2003. Among those present were also heads of state. On behalf of the Netherlands Minister Lilianne Ploumen (Foreign Trade and Development) at the ceremony.