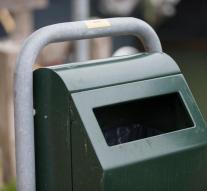 - Cleaners at the Vienna airport on Thursday in a trash discovered a newborn baby. The baby was taken to hospital but died a lack of oxygen for too long.

The cleaners responded to cries of the baby. An investigation by the police revealed that the baby moments before had been on a toilet of the world airport. The 27-year-old mother had the baby then placed in a trash can.

She was arrested at the airport. She made a confused impression, according to the police. Her nationality and destination were not disclosed.