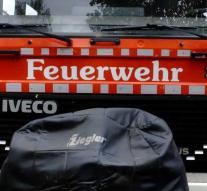 bremerhaven - A nightmare in the North German city of Bremerhaven. A mother had to throw her children out of the window last night because the family was locked in the fire by a house fire.

The mother threw her offspring from the first floor in the hands of bystanders, according to the fire department. The woman was later rescued with a bouncy by the fire brigade. The children and the mother were taken to the hospital with non-life-threatening injuries. More details about the children were not disclosed.

In addition to the family, nine residents were rescued from the building. How the fire started is unclear.