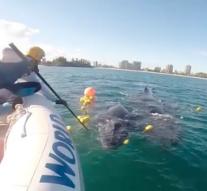 sydney - A baby whale was rescued thanks to a heartwarming collaboration between care and the mother whale from drowning in an Australian shark net.

The four-meter-long animal was caught Saturday in the disputed nets Coolangatta Beach, part of the Australian Gold Coast. The rescue operation lasted half an hour. While the Coast Guard cut the nets, the mother waited patiently on the side of the baby whale. When most nets were cut mother gave it a final push for freedom.

According to Mark Saul of Australian brigade animals 'very calm' remained in the awkward situation. 'The mother pushed occasionally the net to ensure that the baby could get back here air. After the liberation they swam together back to the open sea. '

Images of the rescue operation have in Australia the debate on the nets to separate bathers from sharks, driven again.