Home / World / Mosul was the last bulwark in Iraq 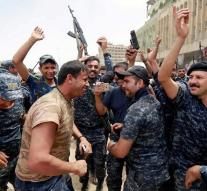 mosul - The city of Mosul, released on Sunday by the Iraqi army, is one of the largest cities in Iraq after the capital city of Baghdad. It is the capital of the oily province of Nineveh and is located approximately 400 kilometers northwest of Baghdad.

Mosul has traditionally been an important home for sunniets. Also Christians, Jezidis, Kurds, Turkmen and many other ethnic and / or religious groups found a home in the city.

For years, the inhabitants of Mosul have been bombarded with violence and terror. After the fall of Saddam Hussein's regime in 2003, many members of the expelled dictator sought refuge. Many of these people joined the Islamic State (IS) terrorist group to fight the shiite dominated government in Baghdad.

For the conquest of the city by IS Mosul counted about 2 million inhabitants. In October last year, the Iraqi army and its allies started a military operation to liberate the city. According to estimates of relief agencies and other sources 900,000 people have left the city since then. Thousands of deaths have also fallen. Furthermore, satellite images show that about five hundred buildings have been destroyed. According to the United Nations, the reconstruction of the city costs about 1 billion euros.

It is a big bang for the Mosul to give up. Through the proximity of Syria and Turkey, the city was strategically important for the terrorist group. After the loss of Mosul, IS in Iraq has no major city under control.