Home / World / 'Most Colombians for peace with FARC ' 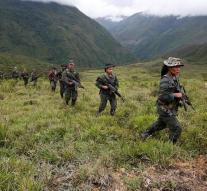 bogota - Most Colombians are planning for the recently agreed peace treaty with FARC rebel movement to agree. According to a poll commissioned by newspaper El Tiempo, which was published Friday.

Of those surveyed said slightly more than 39 percent to keep still referendum on the peace agreement to vote. A small 28 percent against and 10.5 percent still unsure. More than 21 percent plan not to participate in the plebiscite. President Juan Manuel Santos has said that the referendum on 2 October.

The negotiators of the government and the FARC came after four years of consultations in Cuba this week to a settlement. If the population approves the agreement, there is an end to the fight that lasted over half a century and more than 220 000 people lost their lives.