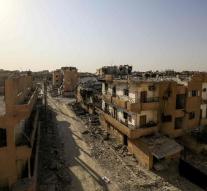 moscow - Moscow has warned that it will go back when its own troops in Syria are taken from areas owned by the SDF. The US-backed militia would have repeatedly fired Syrian government forces working with Russian special units.

The Russian Ministry of Defense has said to have sent the warning to an American envoy. It was told that 'every effort will be made to open fire from areas where SDF fighters are located. 'In addition,' all military means 'will be deployed.

Moscow states that the warriors of the Syrian Democratic Armed Forces (SDF) have taken positions with special US units east of the river Euphrates. They would have fired twice with artillery and mortars on the regime's men.

The prowary rebels claim in turn to be attacked by the government forces and their Russian allies. They said Saturday, among other things, being burned out of the air. Russia denied that and said only Islamic State had bombarded.