Home / World / Moscow wants to improve relations with the US 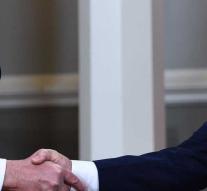 moscow - Moscow would like to improve relations with the US now that Special Prosecutor Robert Mueller has found no evidence of collusion between the Donald Trump campaign team and Russians around the...

'At least there is a chance now to reset a lot in our relationship, but the question remains whether Trump would risk it. In any case, we are ready for it, 'said the chairman of the Foreign Affairs Committee of the Russian Senate.

Mueller has found no evidence for a conspiracy to influence the election struggle. However, the answer to the question whether Trump has impeded the judicial process by undermining the investigation into this issue has not yet been given.