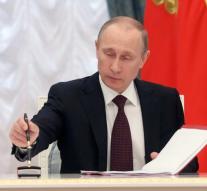 moscow - The Kremlin wants to talk again about the crisis in Ukraine in Berlin, Paris and Kiev. They spoke to each other for the first time in this context in Normandy in 2014. The four-party consultation is therefore called Normandy format. Russia turned off in August of this discussion group, because Ukraine would have been guilty of plotting terrorist attacks.

Russia's President Putin has a telephone conversation with German Chancellor Merkel's willingness to go back to the table with the group, The Moscow Times reported Friday. The main goal is to ensure that the Minsk peace agreements are respected by the warring parties in eastern Ukraine. Moscow and Kiev accuse each other not to fulfill the commitments of Minsk.