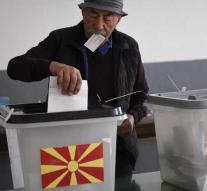 moscow - The vote in the Macedonian parliament supporting the change of the name of the country has been manipulated by a combination of blackmail, threats and buying votes. That said the Russian Foreign Ministry Monday.

The parliament of Macedonia approved a proposal Friday to change the name of the country, bringing the solution of a decades-old dispute with Greece a step closer. This may also facilitate a possible accession to NATO, something that Moscow is against.

'We consider what happened as an open violation of all norms, from both legal and moral point of view. Such dirty manipulations can not be seen as an expression of the will of parliamentarians, 'the Russian Foreign Ministry said.

According to the statement, eight votes that were necessary to reach a two-thirds majority and to implement constitutional changes were secured by 'blackmailing, threatening and bribing opposition leaders.'