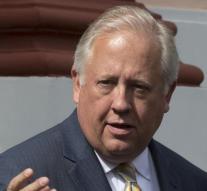 The US government imposed another 38 people and organizations on Tuesday for Russian activities in Ukraine, where the Russians, among other things, annexed the Crimean peninsula. Moscow would also support separatist insurgents in the east of the country.

Ryabkov called the new US punishment in a statement, 'Promoting the Trend Deployed under the Obama Government, which aims to overcome the relationship between our countries.' The Deputy Minister said earlier that he would speak Shannon on June 23 in St. Petersburg. On the agenda there were 'problems in the bilateral relations' between the countries.