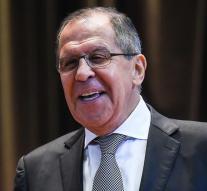 moscow - Russia has announced to respond firmly to the latest US diplomatic penalties. 'We are going to respond hard to things that damage us,' said Minister Sergej Lavrov (Foreign Affairs), who spoke Russian students.

The US has given Russia the chance to close the San Francisco consulate until Saturday. Also, Russian dependances must be closed in New York and Washington. Lavrov complained that his country had only 48 hours to meet the requirements.

The minister announced to respond 'as soon as we have completed our analysis. 'He pointed out that the process in which Moscow and Washington beat each other with diplomatic sanctions on the ears was not initiated by his government. 'It has been begun by the Obama government to undermine the relationship between US and Russia. '

The governor presumably referred to the decision of Obama to force 35 Russian diplomats to leave at the end of last year. Moscow did not react immediately, but in July it decided to recommend Americans to sharpen their diplomatic staff in Russia.