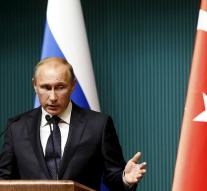 moscow - The Russian government will on Monday with a list of Turkish goods that Russia no longer allowed to enter. Interfax news agency reported Sunday on the basis of government sources that probably only foods are blacklisted.

The list is part of the economic sanctions against Turkey and Russia announced earlier, since the Turkish military had shot down a Russian plane near the border with Syria. Apart from the import ban, even some Turkish companies will have to cease their operations in Russia and charter flights are abolished between the two countries.

There are already more stringent checks on traffic between the two countries. Turkish lorries and ships are more checks at borders and ports. It also introduced visa requirements for Turkish citizens starting next year, given President Vladimir Putin Friday by decree.

The Turkish Stream project, a pipeline from Russia to Turkey for the transit of gas to Europe, will be in the trash. The construction of a nuclear reactor in Turkey may find no passage, said Minister Alexei Oeljoekajev of Economic Development.