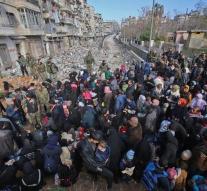 moscow - More than 8,000 civilians have left the past 24 hours the eastern part of Aleppo. Among the refugees were 3,000 children, said Friday the Russian army in a statement. It would also fourteen rebels in the Syrian city surrendered.

Russian Foreign Minister Lavrov showed Thursday knowing that the Syrian army, which captured the last few days parts of the old city of Aleppo, would cease its military activities in order to give citizens the opportunity to flee the battlefield.

On the other hand Western journalists reported that there are still shelling were heard after that statement. The US government said they have no information that there is a cease-fire in Aleppo is ongoing.

The Russians are now working to rid the rebels retook parts of eastern Aleppo mines.