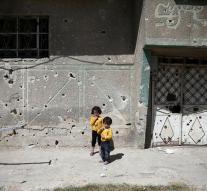 damascus - Charity SOS Children's Villages has 156 children and 46 employees evacuated from a reception center in the Syrian capital Damascus after Tuesday there were two mortar shells landed. Everybody was unhurt, but the organization is deeply saddened ' '' about the attack on the children and called to end all warring parties on Wednesday the violence.

The children had already been displaced because of the war. In 2012, all children and staff were transferred to Damascus from Aleppo. The facility in the city had come to be middle of the line of fire. Now the residents had to flee so again. The organization has now moved everyone to a safe location ' '.

' With risked their lives to put my colleagues every day to provide to children who take care of their parents lost a new home in the children '', responded director Margot Ende- van den Broek of the Dutch branch of SOS Children's Villages indignantly. ' This requires courage and willpower, but also a safe place to give that help. ''