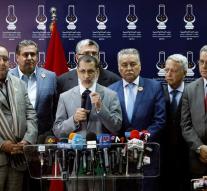 rabat - Morocco has a government again after a deadlock of six months. Members of six parties represented in the new cabinet, according to state news agency MAP headed by the Party of Justice and Development (PJD).

Morocco can not pick a single party a majority in the elections to the 395-seat parliament. As a result, government Coalition are necessary. The PJD has made in the negotiations with the new coalition partners finally from an important ministry, the Department of Justice and Freedoms.