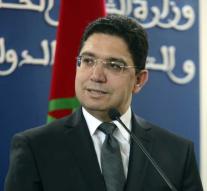 Bourita said the Moroccan embassy in Tehran is closed because of the support to Polisario, the independence movement for Western Sahara. The Iranian ambassador is also expelled. Iran and Hezbollah, a Lebanese ally of Tehran, have not yet responded to the Moroccan accusations.

Morocco incorporated the Western Sahara, a former Spanish colony, in the seventies. This led to an armed conflict with Polisario, which wants to form its own state for the Sahrawis. Officially, an armistice reached by the United Nations has been in effect since 1991 between Polisario and Morocco.