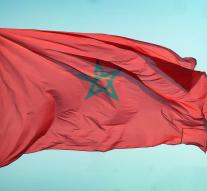 rabat - Moroccan police on Wednesday arrested 52 people suspected of terrorist activities. The authorities speak of people who are inspired by the terrorist organization Islamic State.

The detainees would have to commit several attacks in Morocco. Police have weapons and materials for making bombs were seized. It involves the largest group of terrorist suspects who was arrested in recent years. Moroccan police recently dismantled several terrorist cells which had plans for attacks at home and abroad.