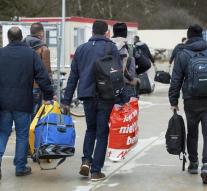 amsterdam - Moroccans in October asked most often asylum in the Netherlands, followed by Algerians and people from Eritrea. The number of Moroccans and Algerians since July month-on-month rising. In October conducted Morocco and Algeria both countries back to the list of new asylum applications.

Together they make up one third of the total of these applications, according to figures from the Immigration and Naturalisation Service (IND). In November, nearly 2,000 people questioned for the first asylum. In addition, more than 1,500 family members came to the Netherlands in the framework of family reunification. These are overwhelmingly Syrian war refugees.

Moroccans and Algerians make virtually no chance in the Dutch asylum procedure, but they deliver the IND a lot of work. It is not clear why they keep coming anyway. Possibly a reason they volunteer to return to their motherland after undergoing the procedure meekrijgen an amount of about 2000 euros.

Another possible cause is that they hope in a recent ruling by the court in Groningen. It was Secretary Dijkhoff a slap on the wrist (Asylum) because he decision would have supported well that Morocco is a safe country. Against this judgment is still an appeal case. The Council of State has only the decision of the Groningen judges suspended pending appeal. This means that asylum seekers can be sent back to the North African country.

The asylum figures is also striking that the third large group of asylum seekers from Eritrea, in large part consists of minors. Nearly two-thirds of the 190 initial asylum applications was done by this group, particularly boys who are under eighteen say.

The total number of new asylum applications was again slightly higher than last month. Since the summer puts this increase steadily, but the numbers are much lower than last year.