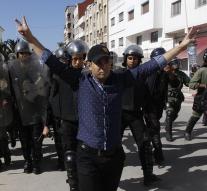 rabat - A 22-year-old Moroccan died of injuries he sustained in protests in the north of his country. Imad El Attabi of the city of Al-Hoceima died in hospital on Tuesday, confirming the authorities and an involved lawyer. He is known to be the first protagonist to come alive since the beginning of the protests in October.

Attabi suffered serious injury in July when protesters collided with the police. The authorities claim that the twentieths were hit by stones. A lawyer involved, working closely with the victim's family, said it was more likely that Attabi was hit by a tear gas grenade. He then hit a coma.

The tension in the Moroccan Reef area has elapsed since October. Then a fisherman came to life when he was seized to rescue a garbage truck. That led to violent protests. Residents of the region feel disadvantaged by the central government.