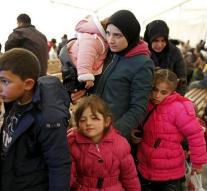 geneve - For the first time since the refugee crisis erupted in Europe, more women and children than men as refugees en route to Europe. This suggested Tuesday the Children and UNICEF educational organization of the UN.

The number of children among the refugees has tripled compared to six months ago, according to UNICEF. In June last year was 73 percent of the refugees from Greece further into Europe, a man. Meanwhile, 60 percent female or child.

An important route from Greece to Macedonia on Tuesday in northern Greece still blocked by hundreds of refugees because they are angry not to be able to Macedonia.