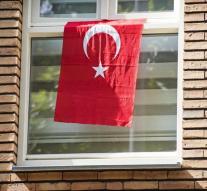 berlin - The number of Turkish asylum seekers in Germany has increased considerably over a year. The German authorities received more than 4400 asylum applications from Turkish citizens between January and August.

According to the German Bureau for Migration and Refugees (BAMF) in the same period in 2016, there were still 2836.

The German authorities were unable to say what the background of this increase was on Monday. No statistics are kept on the motives of fleeing people, a spokeswoman from the Ministry of Interior declared.

The reason may be partly in the failed coup last year. The German ministry announced in April that since the coup attempt, 262 Turkish diplomats and soldiers have made an asylum application. The Turkish authorities arrested tens of thousands of people in the wake of the confused coup.