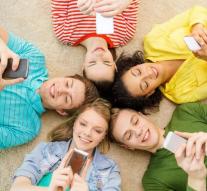 new york - The number of users on social media has passed the limit of three billion. That is more than forty percent of the world, The Next Web reports based on figures from We Are Social.

For the moment, it does not seem that the rising line is coming to an end. For example, 121 million new users joined in the last quarter.

Facebook is by far the biggest platform. Monthly users have increased to more than 2 billion, Mark Zuckerberg announced in June. In June, 1,32 billion people were on average daily on the network site.