Home / World / More than one in five Europeans aged over eighty 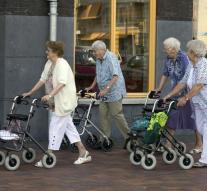 The figures come from a report published Thursday by the European statistics agency Eurostat on the occasion of the International Day of Older Persons on 1 October.

The aging population is (partly) due to an increasing life expectancy. People who are eighty expect on average that they have to live 9.5 years. That was 8.4 years in 2004.

In all 28 EU countries, women are older than men. Approximately two out of three octogenarians his wife.