Home / World / More than millions of people are very lonely 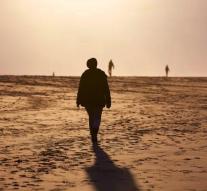 the hague - The Week Against Solitude started on Thursday. Until 1 October, many civil society organizations show what they are doing against loneliness.

About 78 percent of the Dutch population believes that loneliness occurs very often among the elderly. Figures indicate, however, that the percentage of individuals under 60-74 year olds does not exceed 18-59 year olds.

Loneliness is not age-bound, although it is more common among the oldest ones. For example, 75-plus sufferers suffer from all sorts of circumstances that help solitude, such as partner's death and physical or mental constraints.

Loneliness has different types. Social and emotional are the main ones. Emotional loneliness occurs when someone misses an intimate bond with one or more people. Usually it is the life partner. Social unity is the lack of social contacts, missing friends, acquaintances or colleagues.

In the approach of loneliness, more than forty organizations work together, including the Army of the Salvation, the National Elderly Fund, the National Association of Sunflower and Humanitas. They have joined the Coalition Erbij.

Initiative of the Week against Loneliness is Coalition, a national partnership of civil society organizations committed to reducing loneliness. According to Coalition Erbij, the struggle against loneliness is 'urgent and important'.

It is estimated that one million Dutch people feel severely lonely. Their situation can lead to health problems and even increase the risk of premature death.

The coming week, hundreds of local activities will be on the program where people with a small social network can make new contacts and strengthen existing contacts. Schools visit care homes, elderly people play football or dance, neighborhood centers cover a lunch table for residents.

The Week to Solitude lasts until October 1 is organized since 2010.