Home / World / More than forty dead by US extreme weather 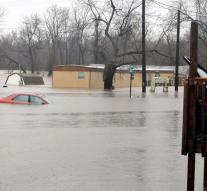 dallas - The number of deaths caused by the extreme weather in the United States the forties. In more and more states casualties from floods and tornadoes. Elsewhere in the US are major problems are expected by a snowstorm.

The latest deaths were recorded in Illinois and Missouri. There were a total of thirteen people were killed by floods, US media reported. In a village in Illinois a car with three adults and two children was seized by a tidal wave. The occupants drowned. In Missouri, where eight people died and many roads are closed, the emergency is declared.

Earlier winners included eleven deaths from tornadoes in Texas and flooding in states in the Southeast of the US, such as Tennessee and Mississippi. The provisional death toll stands at 43.

And more bad weather is approaching or has already reached the United States. In the state of New Mexico is the 'snow-emergency' declared. Several municipalities are completely cut off from the outside world. Because of the strong winds, there are heaps of snow occur more than two meters high. Also in Texas and Oklahoma warns of blizzards.

Due to the extreme weather across the country have been canceled more than 1,100 flights. Approximately half is accounted for by the airport in Dallas (Texas). That is one of the busiest transport interchange airports in the world.