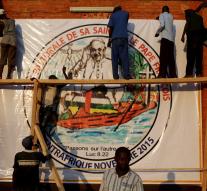 - More than one million children in the Central African Republic (CAR) are in urgent need of humanitarian assistance. Nearly half of all children under five are malnourished, UN agency UNICEF sets Friday ahead of the visit of Pope Francis in the violence-plagued country.

Two million children, according to UNICEF since late 2012 affected by violence between Christians and Muslims, of which 1.2 million are in urgent need of help. " There is more international help ", said Mohamed Fall, UNICEF Representative in CAR.

Pope Francis is expected Sunday in the Central African Republic. He began Wednesday in Kenya on a six-day trip through Africa. The Pope does first have to Uganda before he travels to CAR. UNICEF hopes that the pope 's visit to CAR on reconciliation during the warring parties.