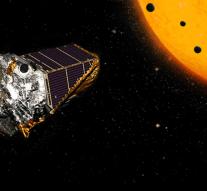 honolulu - Scientists have found back more than a hundred planets in other galaxies. This has now demonstrated the existence of nearly 3,400 planets. Moreover, there are thousands of potential planets.

Astronomers saw the star K2-72 four planets that might be rocky, like Earth. They are 20 to 50 percent larger than the earth. They are closer to their star than Mercury is to the sun, but scientists do not rule out completely that life could be possible.

The so-called exoplanets have been found by the Kepler space telescope and telescopes in Hawaii and Chile among others.