Home / World / More than a hundred dead by storm in India 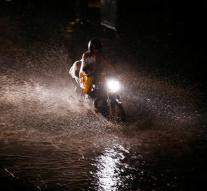 - Over a hundred people last week in eastern India killed by the monsoon. In the region, millions of people affected by the heavy rains.

In town last weekend Orissa were 52 people killed by lightning. Most were farmers working in the fields, authorities said. Bihar came last week at least 28 people by floods and in the northeastern state of Assam 34.

The Kaziranga National Park in Assam also drowned seventeen rare rhinos. Among them were nine calves. Nine other animals were saved. In the national park reside about 2,400 copies of this endangered species.