Home / Tech / More than a billion mobile users in India 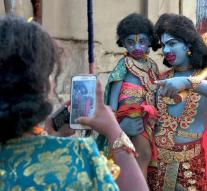 - The number of mobile phone users in India last October passed the limit of one billion. This is India, after China, the second country to reach this milestone.


Last October, the number came out at 1.03 billion, an increase of 0.7 percent compared to the previous month. Thus, the Indian telecom authority announced yesterday.
India has about 1.25 billion people. This is the country, after China, the largest number of inhabitants. It is therefore not surprising that India is the second country in the world with more than one billion mobile users.
In the land of his 12 major telecom providers actively fighting for market share. The largest is Bharti Airtel which has about 200 million users.
NEW