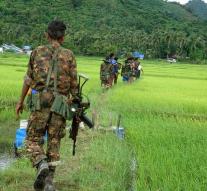 yangon - At least 59 insurgents and 12 members of security forces were killed in Myanmar on Friday when rebels in the state of Rakhine attacked thirty police stations and a military base.

For example, one hundred and fifty militants tried to enter an army base, according to the government. According to the army, a total of about one thousand attackers were involved in the coordinated actions.

Most of Myanmar residents are Buddhist, but the attackers belong to a separate ethnic Muslim group: the Rohingya. That group of 1.1 million people is often referred to as 'the most oppressed people in the world.'

For example, they can not become a Myanmar citizen because they are seen as illegal immigrants from neighboring Bangladesh. There are also many stories about maladies.

The attacks mark an escalation in the conflict between the Rohingya and the government. In October, Muslims also attacked police posts. The army then reacted with an offensive according to the United Nations (UN) Muslim burghers were killed, tortured and raped.

After the attacks, 87. 000 Rohingya flew to Bangladesh. Myanmar then rejected UN accusations of groupings and massacres directed against the Rohingya people.