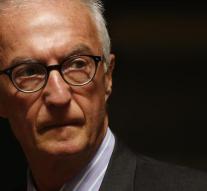 brussels - Europe counts more than 50,000 radicalized persons. That estimates the European Union's anti-terrorism coordinator, Gilles de Kerchove, in a questionnaire with the Flemish newspaper De Morgen. The Kerchove also doubts whether it is possible to deradicalize jihadists. 'Someone who is very radical will stay with his ideas.'

In Britain, according to him, 20,000 rationalized. About 3,000 of them make the British worry, and 500 are closely monitored. Especially the shift of who is not only radical but also potentially dangerous is, according to De Kerchove, difficult. The 'systematic bashing' of intelligence services, which does not exchange enough data, is not right. Just in that area, big steps have been taken, he says. The problem lies with the analysis of the data.

The Kerchove, for ten years in office, emphasizes the need to reject Islam's image of Islam. Also, Islam in Europe should not know 'interference more from the outside'. 'Imams must be trained with us. 'Those who have radical ideas must also achieve that person' does not use violence to achieve those ideas. '

According to De Kerchove, Belgium accounts for around 500 Syrian gangs and more than 2000 rationalized. AIVD intelligence service estimates in 2015 that the Netherlands has 'a few hundred' jihadists and a few thousands of sympathizers. The number of Syrian gangs last June according to NCTV's anti-terrorist service was about 280.