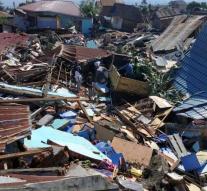 jakarta - The number of victims of the earthquake and the subsequent tsunami that hit the northwest of the Indonesian island of Sulawesi has risen to more than four hundred.

The authorities expect a rapid increase if contact is made with remote areas on Sunday. Vice President Jusuf Kalla said that there may even be thousands of deaths.

According to the latest reports, 420 people have been killed in the provincial capital of Palu, while dozens of people are still trapped under the rubble of houses, hotels and shopping centers. Many of the dead have fallen on the beaches of Palu, where a large festival took place.

'We are struggling to use heavy equipment to find victims under the rubble of buildings because many of the roads to Palu-City are damaged,' said the head of the disaster management Willem Rampangilei according to the news site Kompas. of Palu is damaged and only helicopters can land there.More than 14 000 people in the city are homeless and are taken care of in tents.

There are still no reports from Donggala, a city where about three hundred thousand people live and which must have been hit as one of the first by the three meter high tidal wave. Donggala is also closer to the epicenter of the earthquake, which had a force of 7. 4.