Home / World / More than 40 killings at bombing coalition VS 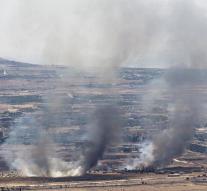 beiroet/london - In the case of air attacks probably carried out by the Western coalition led by the US, 42 deaths have fallen in eastern Syria. According to observers, the attack took place on Monday in al-Mayadin, which lies along the river Euphrates and is occupied by the Islamic State (IS) terrorist movement.

The observers of the Syrian Observatory of Human Rights argue that the bombed property was a prison of IS. A spokesman for the coalition, including the Netherlands, has informed the matter of investigation.