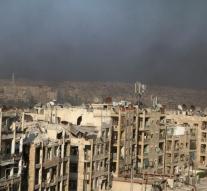 aleppo - More than three hundred people have left the besieged Syrian city of Aleppo. They were able to escape through one of the so-called humanitarian corridors that have been set. Additionally surrendered eighty rebels out of the city over.

That made a Russian topmilitair on Monday in Moscow. The Russians are fighting alongside the Syrian rulers against the insurgents. Syrian government forces recently captured all the major roads leading to Aleppo which some 300 000 inhabitants are included.

Minister Bert Koenders (Foreign Affairs) did earlier on Monday a call to prevent Aleppo is a new synonym for the failure of the international community, such as Srebrenica (the Bosnian city where thousands of people were killed in 1995). He wants that pressure on the Syrian government to put an end to the siege.