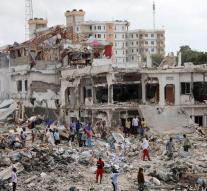 mogadishu - The death rate due to a bomb hit on a busy intersection in the Somali capital, Mogadishu, was raised to 231 on Sunday. The rubble of collapsed buildings is still being sought for victims, but the attack is already by far the bloodiest since al-Shabaab's Islamic militants in 2007 proclaimed the holy war.

The director of a hospital confirmed that 221 deaths were counted. Another hospital reported ten. The attack caused more than three hundred people to be injured.

Police said that a jihadist in the center had a truck explosive explosion for a hotel at a crossing of major streets with government offices, restaurants and kiosks. The huge clap destroyed entire buildings and destroyed many vehicles in flames. Two hours later, a car bomb explosion elsewhere in the capital, in the Medina district, triggered a ravage.

The responsibility was not claimed on Sunday, but the authorities assume that al-Shabaab is behind. President Mohamed Abdullahi Mohamed spoke for the state radio of a national tragedy. He called people to donate blood and announced three days of national mourning.