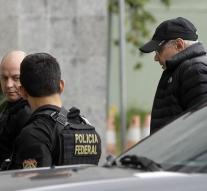 - After an uprising in a Brazilian jail have escaped at least two hundred prisoners. Brazilian media reported on Thursday (local time) that the prisoners in Jardinópolis, a town north of the metropolis of São Paulo, a few buildings of the prison were fired. One of the prisoners was killed in life.

According to relatives of prisoners beat inmates mutinied because of poor conditions in the prison. Brazil is a country with one of the highest numbers of prisoners per prison. The cells are usually overcrowded and living conditions poor.

Some prisoners have been arrested again.