Home / World / More than 200 people from rubble rescued after earthquake 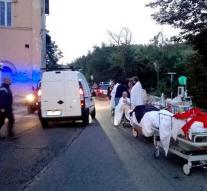 rome - Not only is the death toll rises after the devastating earthquake in central Italy. Rescue workers have been so far managed to get away 215 people alive under the rubble, reported the Italian news agency ANSA Thursday on the authority of the fire department.

Even the fire department has put more than 2,000 people and four hundred vehicles in the disaster area to work. Searching through the rubble is still in full swing.

The authorities now have the official death toll slightly adjusted, to 241. was mention earlier of 247 fatalities. That number will almost certainly rise. The rescuers are confident that many more victims are buried under the rubble. Hospitals are about 270 wounded.