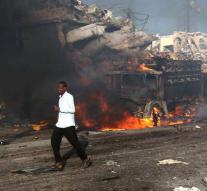 mogadishu - An attack by a car bomb in the Somali capital, Mogadishu, killed 22 people and injured around forty. The police fear that even more deaths are falling under the rubble of some buildings collapsed.

The bomb exploded at a busy intersection, in a neighborhood with many government offices, hotels and restaurants. According to eyewitnesses, a hotel where often government officials, journalists and foreigners returning Somalis may be the target of the attack.

The responsibility has not yet been claimed, but in the past the extremist group of al-Shabaab has committed similar attacks in Somalia. The group associated with the terrorist network al-Qaeda wants to establish a strict Islamic regime in the African Horn. A 22,000-man-strong force of the African Union supports the Somali forces in the fight against al-Shabaab.