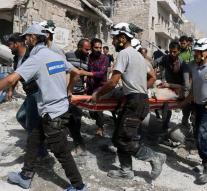 damascus - More than 180 people in the Syrian city of Aleppo slain since the end of the truce between rebels and government forces. The Syrian Observatory for Human Rights reported that Saturday.

Rescue workers from the UN's think only Saturdays are certainly kill fifty cases and hundreds of people injured. In the small number of hospitals that are still open are insufficient doctors to treat the wounded.

The military claimed Saturday for the third consecutive day of air raids on Aleppo. Monday ended Army cease-fire a week had gone before. The rebels fighting against President Bashar al-Assad would have violated the file hundred times. They turned the file according to the military to rearm itself.