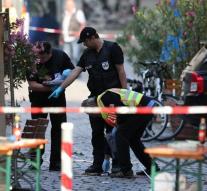 - The Syrian man who blew himself up Sunday and fifteen people injured in the German town of Ansbach called in a video for more attacks. This says US monitoring group SITE.

The attack outside an outdoor music festival in Ansbach, a city of 40 000 people southwest of Nuremberg, the fourth act of terror was in Germany in a week. Bavarian Interior Minister Joachim Herrmann said Monday that a video was found on the cell phone of the man in which he pledges allegiance to IS.

SITE quoted the man in the video in which he says,, surgery until martyrdom 'to perform in Ansbach. He said the attack in Ansbach was a response to the crimes committed by the coalition,, in cooperation with Germany by bombing and killing men, women and children. '