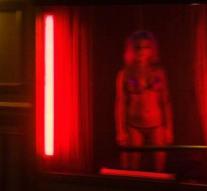 the hague - The number of anonymous reports about possible abuses in prostitution has increased again this year. During the campaign Report Crime Anonymously (MR) against human trafficking occurred between February and October 279 reports received about coercion, exploitation and illegal prostitution. That's an increase of 11 percent compared to 2015.

The informants felt by women probably had to work against their wishes or had to give a lot of money. Also 26 reports came in about potential child victims. Often addresses or Internet ads were mentioned in connection with possible abuses. For example, there was talk about men, drivers and female pimps who constantly seem to have control over prostitutes. Also noticed that some women still were taken to various locations.

Thanks to the notifications have been made this year, according to Mr several arrests and solved cases. The campaign was also clear that people had to watch out for possible abuses and what they had to report.