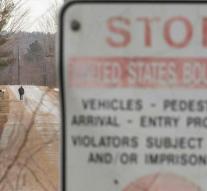 toronto - The number of asylum seekers crossing the border from Canada to the United States has increased again after a temporary decline. The authorities in Toronto announced Friday that in the month of June 884 refugees had come in and detained by the police. The 2017 counter came to 4345, which indicates that the 2011 record year will be surpassed.

The lion's share of migrants, 88 percent, chose the province of Quebec last month. Earlier this year, they sought their salvation often in Manitoba. Many asylum seekers say on arrival that they have left the US for fear of being deprived as a result of the new policy of President Donald Trump. After interrogation and screening, they may submit a request for a residence permit in Canada. However, their previous stay in the US is a disadvantage.