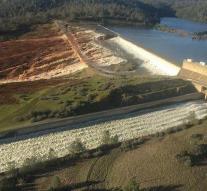 sacramento - Now that the worst danger is over for the Oroville dam, according to the California media thousands of evacuated residents returned home. 'The Sacramento Bee' reported Wednesday that life in the city directly under the dam slowly regains its normal course. Supermarkets have opened the doors and the transport has started again. But there is also a new storm front approaching.

The depression reaches the area to expectations Thursday early in the morning and can provide a fair amount of rain during 48 hours in the mountains also for snow. Based on the weather reports treasure the management of the dam that can flow between 1100 and 1700 cubic meters of water per second to Lake Oroville.

Currently discharged through the main spillway 2800 cubic meters per second. That will remain so. The water level in the lake has now fallen to almost 6.5 meters below the critical level. Restoration work on the drains go unabated pace.